While the Ford Government touts items in Bill 88 – regarding pay transparency and other items – that may arguably improve some working conditions, its key feature is minimum wage for time on ‘assignment.’ That is, a $15 per hour wage, but not for all hours worked. In other places where app employers have successfully lobbied for a minimum wage for engaged time only, app-based workers have ended up earning less.

“We know gig workers around the world who have dealt with minimum wage for ‘engaged time,’” says Jennifer Scott, president of Gig Workers United. “This government is playing a dangerous game with devastating consequences; bringing in a stand-alone bill that carves gig workers out of Employment Standards Act rights and protections is exactly what Uber has been lobbying for – this is the Working for Uber Act”.

“I don’t see how this Government could pretend this is an improvement for us, when the $15 for time on assignment is even lower than the wage Uber was lobbying for.”

Minimum wage for time on assignment sets a standard for app-based delivery workers lower than the provincial minimum wage. GWU and CUPW are concerned that this is the thin edge of a wedge that could lower minimum pay standards for more and more workers, as employers are attracted to transitioning to a gig-based work force.

“All workers in Ontario should be worried about this Act,” adds Jan Simpson, National President of CUPW. “If the Ford government is willing to single out app-based gig workers for a sub-minimum wage, then how long will it be before other employers try to move their workforce onto a gig model? Erosion of our hard-won minimum employment standards is unacceptable.”

The unions say Bill 88 does not solve problems for gig workers, and will result in less pay. They continue to demand an end to the misclassification of gig workers. The Ontario NDP previously introduced legislation that would have recognized them as employees with all the rights that entails, including the right to form a certified union that will negotiate collectively for improvements and protections.

Gig Workers United will continue to demand toward exactly that – full employee status and collective bargaining rights so workers can solve their own problems in the workplace, building up from established minimums in the Employment Standards Act.

The Ford government called Bill 88 the “Working for Workers Act,” saying that it improves conditions for us - gig platform workers.

But this legislation really works for Uber and other app employers - not workers.

Let’s unpack that point by point >>

A new ruling from an Ontario Ministry of Labour officer confirms that our path toward worker rights for app-based gig workers is through directly taking on misclassification. The ruling finds Uber Eats workers to be employees and orders Uber to meet minimum employment standards.

The order was made after a detailed three-month investigation, responding to an ESA claim by Gig Workers United CUPW. This order comes as no surprise to Ontario gig workers – it validates what we’ve been demanding since the beginning of our organizing. The order requires a guarantee of minimum wage for all hours worked – from when we sign in until we sign out of the app; no unauthorized deductions; vacation pay and overtime pay; and an end to termination without notice. As clearly stated by workers in the Gig Workers Bill of Rights, this is the path to make gig work decent work.

We are unwilling to accept carve-outs – pay for ‘engaged time’ only, for instance, or second-tier status, representation, and rights. We’ve gone through the channels available to contest our misclassification and this victory supports what workers know: misclassification is the root of the injustices we face every day. The solution has been here the whole time; enforcement of the existing employment standards with full and equal rights for gig workers.

Gig Workers United calls on the current Ontario government and Labour Minister Monte McNaughton to do the right thing, stand on the right side of history and end misclassification NOW.

Gig Workers United CUPW represents drivers and couriers across multiple delivery apps in the GTA and beyond. We’ve earned this representation through organizing on the ground - worker to worker, by strengthening our community, and responding to the demands of workers.

Gig Workers United will continue on the path towards unionization and full and equal rights as a movement for gig workers that is led by workers. We will coordinate with UFCW about how the agreement will be rolled out.

To be clear; as gig workers, we define what our union looks like and how we make decisions. We sit at the table with our employers and put forward our collective demands and we choose the union that sits at that table with us.

TORONTO – Today’s announcement by Minister of Labour, Training and Skills Development, Monte McNaughton about a plan to convene a panel to study portable benefits for precarious working in Ontario who are currently excluded from statutory benefits. This is an announcement of non-action by a government that continues to leave workers waiting for real change.

As we have been since it appeared in the Ontario Workforce Recovery Advisory Committee report, we’re concerned by the call to create a portable benefits scheme in Ontario. It goes hand-in-hand with the OWRAC recommendation for a formalized second-class dependent contractor status. We see from the experience of gig workers in California that in reality the system did not support workers, only carving them out from real benefits and little more than an empty promise.

The panel investigating portable benefits must include the direct participation of the workers themselves. Gig workers will continue to fight for an end to misclassification and full and equal rights for all.

When was the last time one of the apps treated you like a person? Or made your work better?

When was the last time you got a raise? If you get hurt at work, do the apps have your back?

They call you an essential worker, responsible for keeping the city and province safe — do they treat you like you’re essential?

You don’t have to put up with it!

You can join Gig Workers United and we will organize to change it together.

OTTAWA - The Ontario Workforce Recovery Advisory Committee today released its anticipated report on the future of work, and as expected, its recommendations call for the creation of a third category of worker that will not have full employee rights and will not be able to legally unionize.

“This is what Uber and app-based companies wanted,” says Jennifer Scott, President, Gig Workers United. “They lobbied for the creation of a third category of worker and for portable benefits. If the Committee and the Ontario government cared about workers in a just recovery, they wouldn’t kneel to app-based employers lobbying for legislative change to enshrine worker precarity into law.”

While the Ontario government said the Committee spoke to over 700 people before determining its recommendations, the entire process didn’t include meaningful participation from workers and didn’t include worker voices. Because of this, the recommendations end up being a gift to Uber and all other employers that want to gigify work.

“All workers should feel threatened by this report and its recommendations,” says Jan Simpson, National President, CUPW. “These recommendations will result in the gigification of more work. It isn’t raising the bar for gig workers – it’s lowering the bar for ALL workers. We have to fight back against greedy bosses and the governments who support them. We need to make sure workers’ right are protected and expanded, not taken away.”

“A gig worker is a worker, full stop,” adds Scott. “App-based delivery is an essential part of our community. International and provincial courts and governments have already ruled that gig work is real work, that we must be protected against misclassification and have the same rights and protections as all other workers. There are class action lawsuits and Employment Standards Act violations already underway. Uber knows it will lose in court, but if the Ontario government accepts these recommendations, Uber wins.”

The entire process, from Uber’s proposal, to the lack of worker representation on the committee, and the rush in producing a report, signals to gig workers and the labour movement that the Ontario government doesn’t have any interest in truly supporting workers.

The Committee’s report recommends that app employers provide “portable benefits”, or in other words, modest stipends from the company to workers to contribute to the cost of health insurance. “Uber could give us these benefits right now, under existing labour laws, but they’re unwavering in their commitment to avoid having their workers classified as employees,” adds Scott.

“Is it fair that we have to trade full and equal rights for bare bones benefits? We will be permanently excluded from statutory benefits like maternity leave, injury protections, and pensions so we can go to the eye doctor once a year?” says Scott. “Workers know how to tell when something is a bad deal; we’re smarter than this and it’s offensive to be presented with carve outs and window dressing as if that is good enough or what we deserve.” 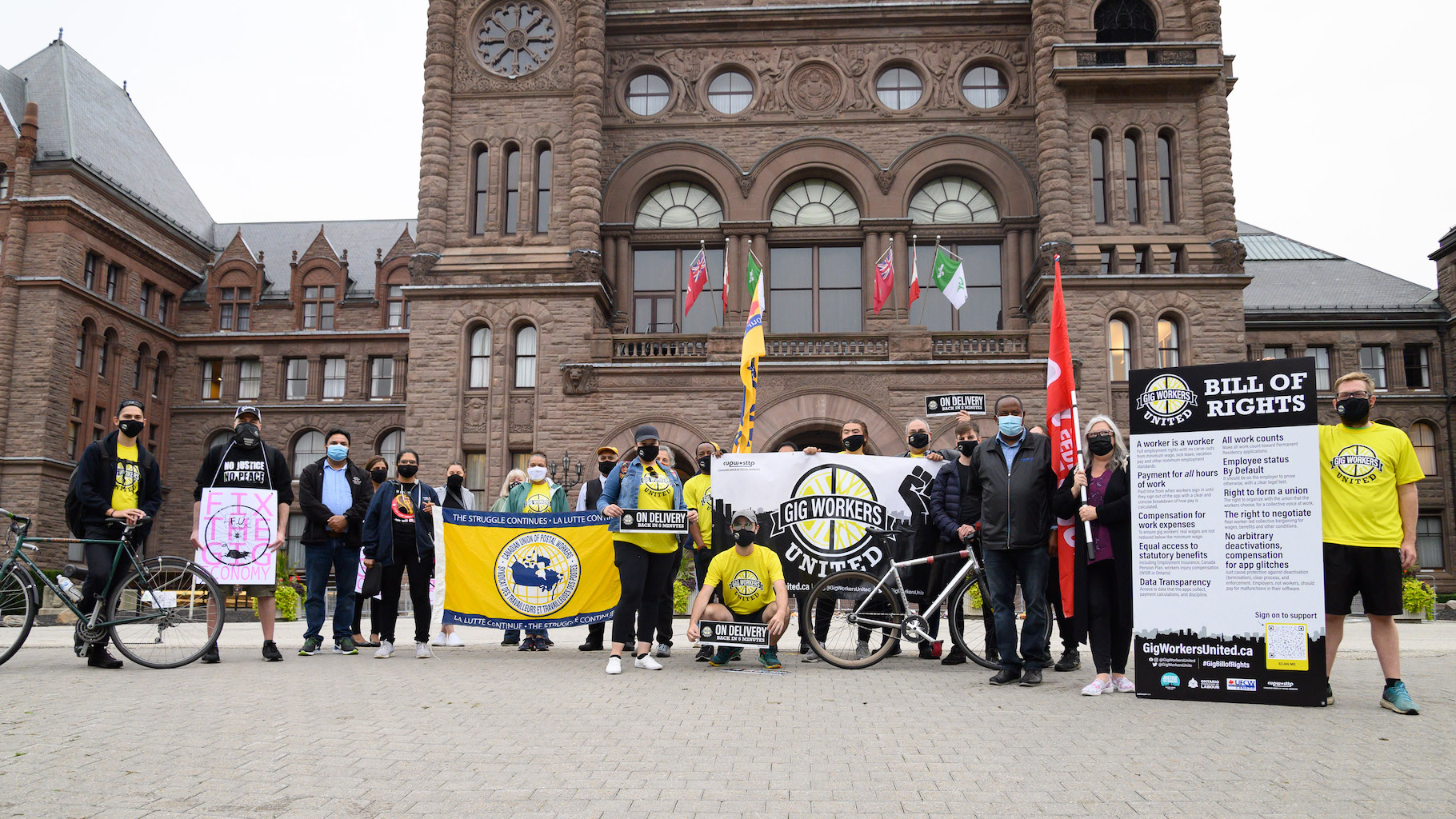 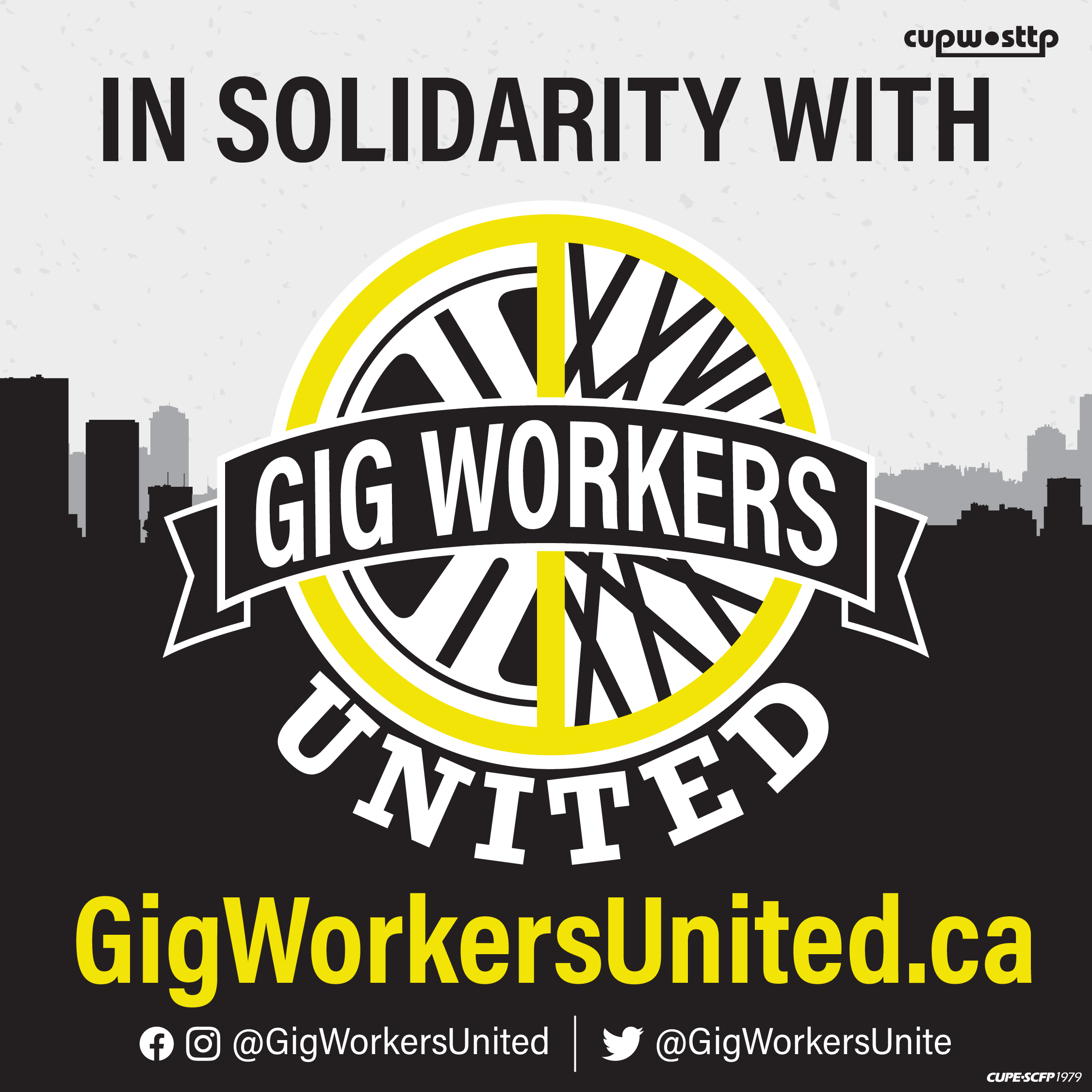 As the Ontario Legislature resumes, the Ontario Workforce Recovery Advisory Committee – a committee without any representation from workers – is preparing to release a report and recommendations on the future of work for gig workers. With the threat of carve-outs for app-based gig workers looming, we must come together to demand Full and Equal Rights for Gig Workers now.

On October 7, the World Day for Decent Work, app-based delivery workers are taking action to demand #MakeGigWorkDecentWork. Show your support by telling Minister Monte McNaughton not to carve out a separate employment status for gig workers. A worker is a worker.

This is an issue for all workers: If Ontario legislates lower employment standards for today’s gig workers, Ontario employers will soon try to gig-ify every job possible.

This is an issue for all workers: if Ontario legislates lower employment standards for today's gig workers, Ontario employers will soon have the green light to further gig-ify every job possible. Show your solidarity October 7th - join the Day of Action!

TORONTO – Couriers are rallying to reject Uber Canada's announcement that the boss knows best what couriers need. Uber Canada's announcement this morning asks provincial governments to enact Uber's version of workplace reform, which they say would offer a savings-account-style benefits plan and enhanced training, but would exclude the rights and protections that go with employee status. 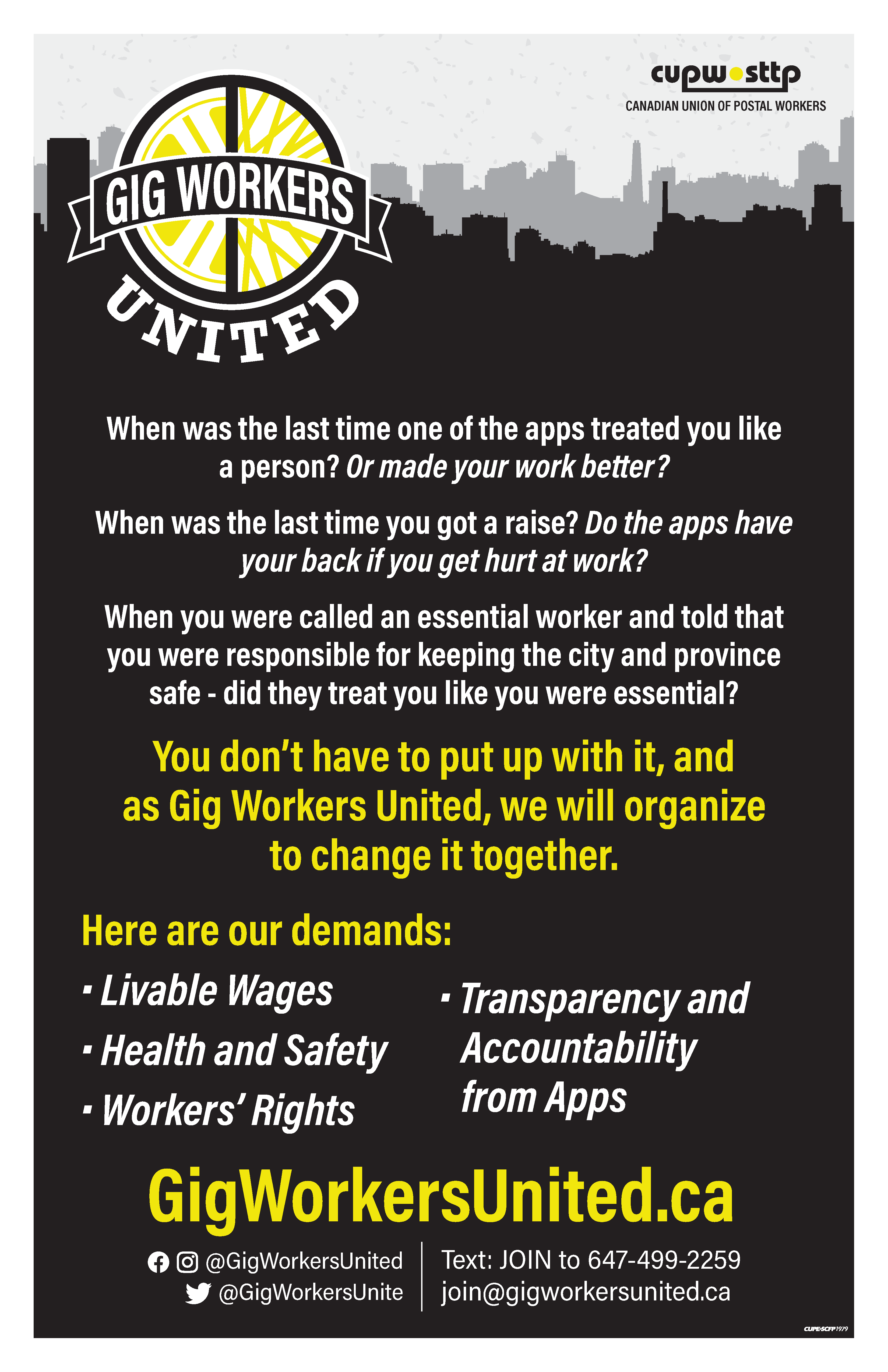 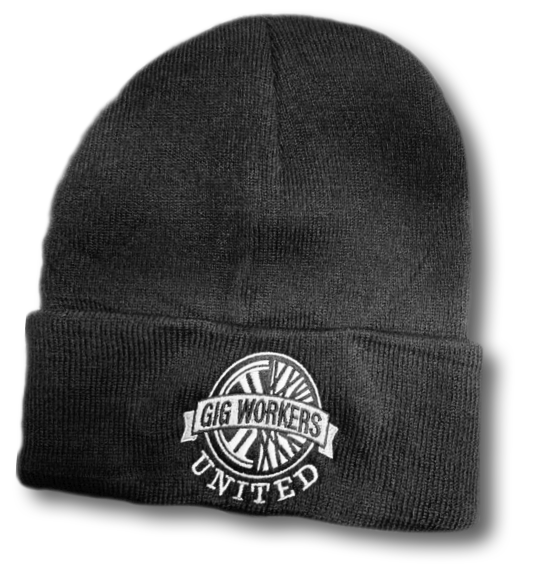 Get a mask, hat, sticker and button to wear on the streets!